Ones and twos win in Richmond; threes lose in Burnaby–

The Rowers 1sts and 2nds claimed two solid wins over Richmond RFC Oct. 20, while the 3rds, though falling short, played a hard fought match in Burnaby.

The Rowers top side took the field looking to get back into the win column after a disappointing match in Kamloops last week. The game against their Richmond RFC counterparts was pivotal, as the winner would join the playoff race in the Okanagan Spring Brewery League, while the defeated would face a much tougher task of making the post season.
Defense was the order of the day early on as both teams allowed only the shortest of yards and tackled well. The Rowers struck early as Henry Recinos hit a penalty from just inside the 22. The teams traded penalty kicks for the first half amongst strong defense and hard running, going into the half-time break tied at 6-6.
The second half saw the teams trade more close, hard runs, but neither allowed a try. When Richmond was pressing early in the frame, Phil Hosie caused a key turnover when the Richmond squad attacked near the Rowers line. The Rowers then worked the ball out of their end and deep into the Richmond half, trading possession, heavy running, and short yardage.
Eventually Jon Nadler broke for a 50-yard run, putting his shoulder into a defender to earn the coveted Hammer Award.
Richmond played very good defense for the rest of the second half and held the Rowers off the try chart until their 8-man, Ben Keith, found space, evading tackles for about 30 yards to finally cross the try line.
Easily their most intense and difficult game of the year, the first division side won by a score of 16-12.

The Rowers’ 2nds found themselves in a physical game early with a well-drilled Richmond side. Running on their home turf, the Richmond seconds used quick forward ball early to pound in across the Rowers’ defense, but were unable to penetrate a firm wall of defenders.
Once the Rowers gained possession, the club moved quickly through their offensive pattern. The team missed a penalty kick early on, but made up for it with two unanswered tries.
Midway through the opening half, the home 15 managed to peel a man out from behind a maul that was formed after a lineout deep in the Rowing Club end. One of the players from the Richmond squad then sidestepped a Rower defender and slipped in for a score. But the Rowers punched in another try before the half to keep their lead.
Halfback Dillon Debono was removed at half time with an injury and Duncan James moved in from wing to take over. The Rowers were able to retain the ball and play most of the rugby in the second half, coming away with a hard fought and convincing 32-14 win.

Despite losing 26-14 to Burnaby, the Thirsty Thirds played some solid rugby at Burnaby Lake. The thirds rucked well and retained a lot of ball. At the half-time whistle the Rowers were up 7-5.

As the second half wore on the 3rds still played strong defence and managed to get in a few long rambles. After a Burnaby player received a red card for referee abuse, the Rowers took over the momentum and played the most of the second half in the Burnaby end.

Unfortunately Burnaby was able to break the Rowers line three times for 65-metre
romps for tries under the posts. Final score: 26-14. 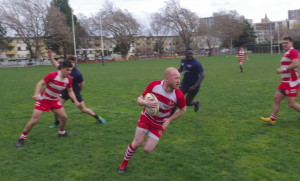 Rowers Reseres fall to James Bay on the Road, 40-24