The VRC lost two from three Oct. 13 as all three squads faced opposition on the road. The Rowers’ first div suffered its first defeat of the regular season in a bonus-point loss to Kamloops, while the seconds added another big win. The thirds also fell to Bayside at South Surrey Athletic Park.

The firsts went into the weekend undefeated and sitting just behind Kamloops in the log as Kamloops had a game in hand. The Rowers looked to catch the team from the Thompson-Nicola region, but Kamloops was ready for the speedy VRC. The Rowers held their own in the match, and the momentum bounced back and forth, until late in the game.

“Kamloops scored a last minute try to win,” said Caleb Hansen. He noted his squad could’ve played better, but that Kamloops didn’t dominate the Vancouver side. He said it was an even match, but the Rowers didn’t play very cohesively. Final score: 32-25.

It will be an interesting game Saturday, Dec. 1, at 2:30 p.m. on Brockton Oval as Kamloops (4-0) visit the Rowers for what will surely be a hotly contested rematch.

The second division team improved their record to 3-0 with a huge 75-25 win over Kamloops. The Rowing Club opened the scoring in the first minute and the squad never looked back.

Kamloops added a try about 20 minutes into the first half, but by that time the Rowers had a firm grip on the game. The first place team faces sixth place Richmond (1-2) Saturday. Richmond last played Sept. 29 in a 23-16 loss to Seattle (1-2).

The Thirsty Thirds travelled to South Surrey for a game against the Bayside Sharks. Bayside started the game strong by running in two quick tries. The Rowers replied towards the end of the half, but couldn’t retain any ball possession, thus they were unable to generate any momentum.

The thirds rucked better and tackled better in the second half and because of this the squad didn’t allow Bayside any points until the Sharks added a late try. Final score: 39-14.

Rowing Club to open second half of 2013-2014 premiership campaign 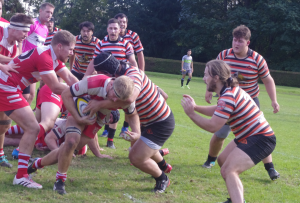 Club Day is a huge success