VRC wins one and loses one to UBC–

The Rowers opened up the second half of the their 2012-2013 campaign with a win and a loss Feb. 9 as they battled UBC, one of the top clubs in the table.

The Rowing Club 2nd division opened the second half of the season against a very young, fit, and well-drilled UBC squad. Despite a lack of size and experience, UBC compensated well with an abundance of speed, and work ethic.

The Thunderbirds opened strong, steadily beating the Rowing Club defense towards their own goal line. Against the play, Rowers’ captain and scrum half Duncan James shot out of the defensive line to intercept a UBC pass and run it back for a try. Fly half Richie Thompson converted the marker to put the home side ahead by seven.

Undaunted, the young university squad was able to bash away at the VRC’s goal line until they finally put one in. The conversion failed, bringing the score to 7-5.

The Rowers showed effective control of the ball and the game for a time, resulting in hooker Aaron “Sushi” Collard scoring on a 5-yard run from a forward pod to put the home side up 12-5. The defense, however, was unable to contain UBC’s wide-open game of high-paced kick-and-chase rugby, allowing a converted try to even the score 12-12 at the half.

Duncan James ran a tight offense in the second half, making good use of the forward pack to move the ball for short yardage, and then going wide to Thompson and the backs for longer runs. James scored another try to give the Rowers the lead again at 17-12. James continued to effectively manage UBC’s pressure game and was able to set up Thompson for a line-drive drop goal in the dying minutes of the match. Final score Rowers 20 – UBC 12.

With the win the Rowers (8-1) pull to within three points of first place Abbotsford (8-1).

The Rowing Club’s top side drew first blood against an excellent selection of UBC’s best with an early converted try. But UBC didn’t take long to respond, drawing even shortly after.

The students quickly exposed holes in the Rowers’ defense and exploited them to run the score up to a comfortable 27-14 margin by halftime.

Undaunted, the Rowing Club 1st division dug deep in the second half, fixing the holes in the defense and making good use of the speed in their back line. Fullback Kevin Gurniak tore up the sideline with two of his characteristic 20-plus metre streaks into open space, while winger Brock Nicholson, and substitute-centre Karl Mudzamba, used their quickness and toughness to break tackles, gaining many yards in open space.

More Rowers crossed the line for tries in the afternoon, including second-row-captain Phil Hosie, flanker Josh Scheiner, flanker Ben Keith, and Nicholson. Centre-back Caleb Hansen dove into the corner of the in-goal area with the ball in an animated imitation of Chris Ashton. He was slow to get up, but the try counted.

The comeback attempt fell short, though, as the Rowers were down 42-29 at full-time whistle. Each team earned a bonus point.

Head Coach Jeremy Sabell, though disappointed with the loss, was impressed with his top team’s resilience. The Rowing Club will face the T-Birds again April 6 at UBC’s Wolfson fields in what will no doubt be a test of how much the team can improve relative to UBC between now and then.

Tomorrow the VRC thirds play SFU on Burnaby Mountain, while the 1sts and 2nds have a bye. 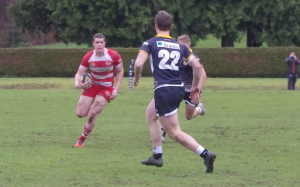 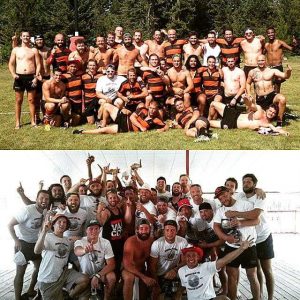