Rowers deliver two wins on their return to Brockton–

The Rowers continued their winning ways last weekend after taking two wins at home. Coming off victories over Richmond the week before, the VRC continued to build momentum by downing Seattle in both the firsts and seconds. The thirds fell to the Capilano “A” team in the first match of the day at the Oval.

The game began on a slick pitch, soaked by the rain, and mashed by three previous games. In a physical and muddy opening, Seattle struck first with two penalty kicks to go up 6-0.

Karl Mudzamba broke first for the Rowers after being fed a pass on the run just before the opposing 22-metre line. Mudzamba looked as though he was going to put the home side on the board as he streaked past defenders untouched. However, as he slid across the line, under the posts, he was ruled to have knocked the ball on. The call was roundly mocked on the Rowers’ sideline.

Seattle won the ensuing scrum and kicked the ball deep near winger Kevin Gurniak. Gurniak scooped the ball off the deck around the Rowers’ twenty-two and started to race toward the Seattle end. He carved his way through the opposition with incredible pace and crossed the try line, garnering the Rowers their first points of the day. Halfback Henry Recinos converted Gurniak’s try to put the Rowers up by a point, and they never looked back.

The game was a physical one, characterized by hard runs on a wet pitch. Dan Smith, Connor Leduc, Ottawa-import Ben Keith, and Henry Recinos all crossed the line. Recinos added a penalty and two conversions.

Seattle tried to work their way back into the match in the second half, scoring two tries, but the Rowers’ top side was able to hold on for a 34-23 victory, complete with a bonus point. The Rowers (4-1) are now in second place behind UBC (4-0). Kamloops fell to third after losing at home to UBC 16-5.

The Rowers’ B-side came into the game undefeated in the Okanagan Springs 2nd tier, and eager to defend their home pitch against a hungry Seattle side.

The Rowers posted points early, scoring three converted tries before the visitors could reply with one of their own.

Brockton Oval was a rain-soaked mess and the Rowers played accordingly. Halfback Duncan James wisely kept the ball in the inside channels and gave the pack a chance to ruck well and consistently recycle their own ball. The Rowers were up 31-7 at the half.

Discipline was an issue in the 2nd half as flanker Quinn Cowie received a yellow card for a high tackle. The other side of the back row, Logan Seabourin joined his teammate in the bin less than a minute later for uninvited comments to the referee. (Seabourin was informed after the game that Rowing Club policy requires that all players who are penalized for back-chatting the ref must buy a round of drinks for their team. The rookie commented that he would “pay for it with [his] magical fairy money.”)

Seabourin and Cowie had three tries between the two of them on the day, helping their team to a solid 41-12 victory. Fly half Richard Thompson kicked very well and kept the home team in good field position. Thompson converted three tries in bad weather. Colin “John C” Robinson, the 8-man, was named man of the match.

With the win, the squad remains undefeated at 5-0.

The Thirsty Thirds fell to the Cap “A” squad 24-0. The Rowers didn’t win a single lineout, but played well in all other areas of the game.

All three teams are away to Abbotsford. Games kick off at 11:30 at CFV Exhibition Park. The Rowers’ next home games are Dec. 1 at the Oval when the first division squad will look to avenge their loss in Kamloops from Oct. 13. 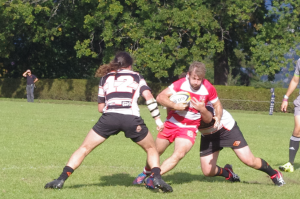 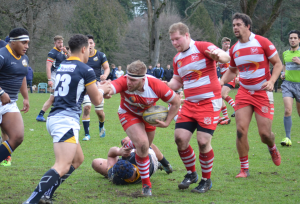