0
Read Time:3 Minute, 17 Second
BC Rugby was at UBC with a full production crew yesterday, as the Ravens and the Rowers kicked off the second half at UBC. The Rowers Ruck Muck was on hand to bring you the blow-by-blow.

The VRC Premiere Division side started the second half of the season looking prepared and serious as they turned out a high-tempo victory against the UBC Old Boys Ravens by a score of 18-10.
The Rowing Club got on the board first as French fullback Roman Plantey slotted a penalty kick from around the 20 meter line. The Ravens were able to answer with a penalty kick of their own to tie the score early. From there, the teams traded hard phases and solid defense around mid-field. Wet conditions made for more direct tactics and difficult handling. Both packs turned out strong set pieces early, despite soft ground. The 3-3 deadlock was broken in the first half when fly half Henry Recinos found enough space along the outside to get loose just inside the Ravens’ half and was able to show off his speed all the way to the end goal. Plantey slotted the conversion to make it 10-3, and another penalty kick to make it 13-3 for the Rowing Club at the half.
The Ravens didn’t quit easily, scoring another converted try in the 2nd half to make it 13-10, but the Rowers defense held strong. Team tackling was very good, several strong open-field tackles by Brandon Kaye were audible on the sidelines. Substitute flanker Scylar “The Salmon Arm Charm” Dumas put in a well-earned insurance try to seal it.
The pack looked very strong in an exceptionally physical game, with new hooker Jason Carton and 8th man Lockland Campbell showing that they are integrating well with their new club.

The First division also got off to a strong start against the Ravens, beginning their season with a 15-11 win. Young fly half Trevor Canton opened the scoring by taking advantage of a penalty opportunity 25 yards out and giving his team a 3-0 lead. The Ravens were able to answer with a penalty of their own, but had trouble moving the ball against a well-drilled Rowers defense that was executing well, and making strong tackles behind the gain line. Blind side winger Kevin Gurniak carried one in along the touch-line to put the visiting side up 8-3 on the neutral UBC pitch (both Brockton Oval and Jericho were deemed unplayable by the Parks Board). Andrew Meakin made good on a beautiful corner conversion to give the Rowers a 10-3 advantage. Shortly after the Gurniak try, fullback Liam Carter put an exclamation point on a strong run, finding the mud of the end goal and extending the Rowers lead to 15-6 at the half.
The Rowers 1sts held on through both mental and technical errors in the second half. The Ravens looked stronger and ended up playing more of the rugby and moving in a positive direction for much of the period. The Rowers conceded a late try but held on strong for the victory. Hard forward play and fundamental defense were clearly the 1sts strong points. They’ll be looking to improve of those aspects through the break.
The scheduled Third Division game against new league entrants Squamish was called off due to poor pitch conditions. The Ruck Muck is tracking chatter that the game is to be made up on February 14 at Brockton, as the rest of the league takes a break for the Las Vegas 7s tournament, but have been unable to confirm with BC Rugby.
The 1st Division and Premier League are next scheduled to be in action February 21st at home against the Castaway Wanderers. The Third Division is away that weekend against the Capilanos at Klahanie. 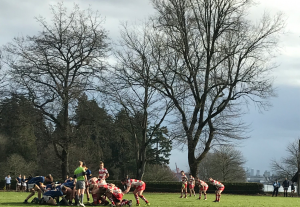 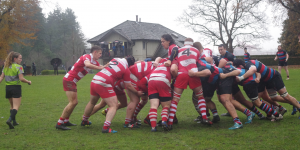