Skip to content
The Rowers lost all three matches away at the Caps this past weekend. Despite disappointing results, turnout remains strong and all sides are playing high-effort rugby. All 3 teams will be at home March 14th, and the Thirds play next weekend at Balaclava park against the Kats.
Prems
VRC’s top side lost a close, well contested match to the Capilanos on the road, as they fell to their arch rivals 15-10. The Rowers continued to play strong and tireless rugby, exhibiting tremendous conditioning and toughness, but failed to put enough points up for the victory.
The game was an entertaining one with numerous breaks in both directions and fierce defense. The Rowers fell behind 12-0 early on, but did not give up. They ran hard attack lines and persisted with a sustained assault before substitute 8th man Michael Jordan put in a try, and Romain Palantey slotted the conversion. It looked as though the Caps were prepared to put it away, as they ran multiple hard charging attacks at the Rowers’ endgoal in the second half, but the defense held and the Rowers were able to survive to mount an attack of their own. The Capilanos’ defense was also tough, denying the Rowing club a run at pay dirt before taking a penalty about 10 yards out. Down 12-7, The Rowers elected to take the points and Plantey (fresh off a short rest from a yellow card) slotted the penalty kick. The Caps were able to answer with a penalty kick of their own to make it 15-10 and, despite a valiant late effort and a few strong attacks by winger Nick Samija, the Prems were unable find the equalizer.
Coach Sabell, while no doubt disappointed with the result, appeared proud of the effort from his top side. The Prems will be in action next on the 14th of March at Brockton against the U-Vick Norsemen.
1sts
The Rowers CDI First Division side lost to their Capilano counterparts by a score of 37-15. The Rowers got off to a slow start, allowing the Caps to put 17 points up before answering with a try by the hooker, Jason Carton. The Rowers lost their tight head prop, Keegan Watcham-Roy, on a straight red card in the 25th minute for what the referee judged to be an intentional dump-tackle.  The Capilanos defended well and put up a tireless attack to earn the victory. Liam Carter was able to kick a penalty, and convert a late try by Charlie Waddell, but it wasn’t enough. The Firsts will be working on defense and ball retention at training in the bye week. Their next match will be March 14th against UVic at home.
Thirds
Sparse attendance at practice this past week was made up for on gameday as the Third Division turned up in numbers on Saturday for the first game of the day away at the Capilanos. Despite a strong turn out by eager veterans and maximum effort by the Thirds’ core of tireless rookies, the Rowers 3rds fell to their rivals by a lopsided 35-5. Plagued by a lack of fluidity (and a lack of a place kicker), the Thirds weren’t able to put themselves in a position to win. The Capilanos played strong rugby in a victory that wasn’t as lopsided as the score line indicates. A combination of bad luck and poor execution is to blame for a strong VRC effort resulting in only one try on the day. Young lock Keegan Carter drove in for the lone score on a hard and spirited sprint from 8 yards out.
Running the ball in simple phases worked effectively for the Thirds, but they weren’t able to do it consistently enough for points. They’ll no doubt try to build on their strengths next week against the Kats at Balaclava. 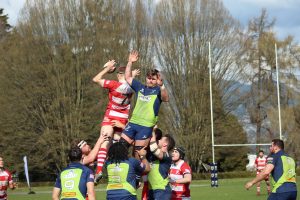