JERICHO PARK–The Rowers grabbed one win from three March 22 as both the 3rd and 1st division teams fell short of victory, while the premier squad orchestrated a spirited come-from-behind victory over the UBC Old Boy Ravens.

The third division side took the field against SFU for the second time in four weeks, but while the opponent was the same, the result was not.

As the match opened, both teams played with uncertainty as possession and position flopped back and forth for the entire half. The Rowers looked to score early when their backline winger crossed the try line, but he knocked the ball on in the end zone and SFU was able to clear the ball off the subsequent play.

The zero-zero battle was broken just before the half when SFU scored a converted try. A minute later they also converted a penalty to take a 10-0 lead into the break. Notable first half standouts were Yooji Cummings, who reeled in high-kick after high-kick and counter-punched SFU with fervent attacking-running, and Tom Braidwood, who mowed down runner after runner with punishing tackles.

As the second half opened, the Rowers seemed determined to change the tempo of the so-far lacklustre game. As the team took the battle to the SFU end, Gareth “Sarah” Brown ran a penalty ball in from about 10 metres out. Brown knocked down three SFU defenders on the power run. The converted try narrowed the gap to 10-7.

But SFU pressed, forcing some Rowing Club errors, and they were able to add another penalty goal to widen their lead to 13-7. The Rowers played most of the second half at or near the SFU try line, but were unable to convert any of their numerous opportunities into points and SFU took the win 13-7.

The Rowing Club first division lost on the road to the Ravens 11-8 in a well-contested, wet and muddy match.

The very physical game saw the referee dealing out five yellow cards and two red cards – one red for each team. Rowers’ flanker “Gentleman” Jim Corbett had a try ruled held-up in the first half by the card-dealing referee. This resulted in a set piece on the Ravens’ five-metre line, but the Rowers’ pack was unable to convert the opportunity into points. The teams traded penalty kicks to knot the score at three at the half-time whistle.

Ten minutes into the second frame, outside-centre Nik Samija streaked down the pitch to score a try. The Rowers missed the convert and were up 8-3. Five minutes later, the Ravens replied with an unconverted try to tie the game at eights.

In the end, a questionable penalty by the Rowers gifted the hosts with a penalty opportunity for the victory. The Ravens’ kicker struck true. The Rowers had a final chance of their own to convert a penalty for the tie in the dying seconds, but they missed and the win went to the Ravens, 11-8.

The firsts were disappointed with their performance and are looking forward to making up for it next week at home against James Bay.

Both teams fought out a hard battle in the forwards and the Rowers dominated up front in the set pieces for the first half. Darren Harris put the VRC up 3-0 with an early penalty. The Stanley Park squad held that lead until one minute before halftime, when the Ravens punched over a converted try to hold a 7-3 advantage at the whistle.

As the second half opened, Caleb Hansen used his legendary speed to put the Rowers up 10-7 when he scooped up a ball and darted down the pitch after some kick-and-kick ball between the two teams. But on the next play the Ravens showed their resiliency and stormed back down the field to punch five points across and take the lead 12-10. Both teams traded successful penalty shots at goal and the Ravens led 15-13.

In the dying minutes, the Ravens strung together some good phases and kept the ball in the forwards, but the Rowers’ secured a turnover ball, allowing for substitute winger Dennis Barnett to kick a wet grubber kick through the mud, and win a footrace to the ball for an unconverted score, putting the Rowers up 18-15 and securing the much-needed win.

The hard-fought game breathed new life into a prems team who had dropped key contests in the preceding two weeks. Simple pattern changes and an emphasis on execution appear to have been the difference. The premier side will look to build on that positive momentum next week at home versus James Bay.
-with files from Ruck Muck staff. 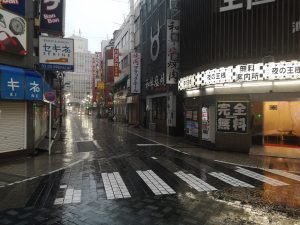