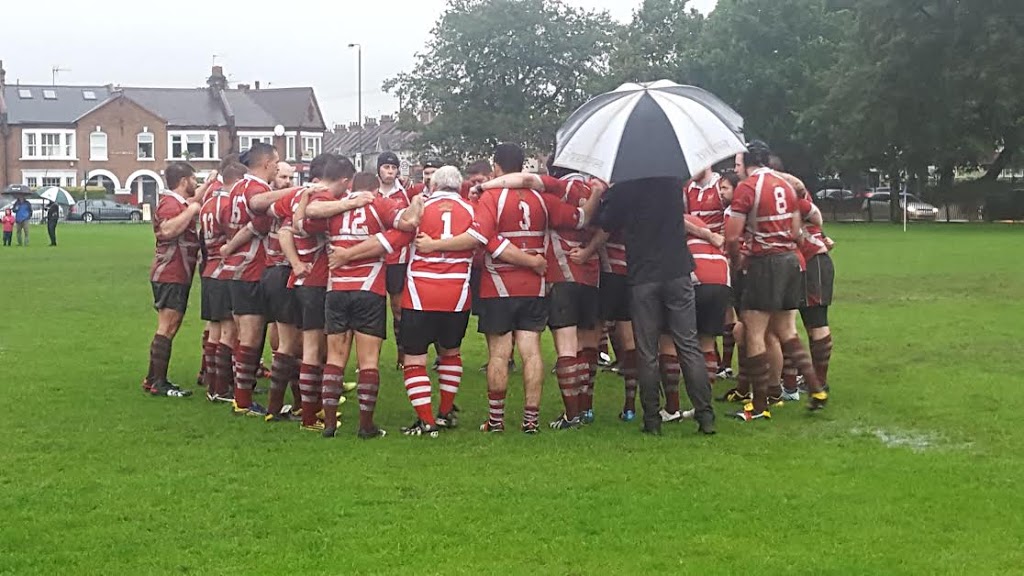 0
Read Time:3 Minute, 56 Second
Rain fell over London in a steady, cold, grey downpour as the Rowing Club Euro Touring Side bussed to the borough of Battersea to take on the Ironsides in the second match of the great 2015 Tour to Remember. I had hoped as we rode there that the rain would let up a bit before kickoff, but it just got harder in rolling waves during the warmup, dialing back every now and then to a steady downpour.
The Ironsides playing pitch is about a kilometer from their clubhouse and warm-up pitch, so we walked there along cobbled English streets in full kit and boots, already soaked to the bone. The lines on the pitch had long been washed away by rain, and puddles had gathered atop several mud pits of unknown depths.
The Rowers came out strong, recovering a greasy loose ball and working through phases after receiving the opening kick. The Ironsides played hard defense, especially near their own goal line. They were able to absorb a few phases before Dave Hall fought off a two man tackle to open the scoring. The conversion missed and it was five to nil for the Rowing Club.
A few more wet phases after the re-start, winger Nik Samija got the ball in space for a long run up the outside. Tour Captain and noted minute hog Jamie Overgaard then carried it on a pick, drew the defender and set up veteran VRC front row forward Mark Smith for a try from about 5 yards out, running through defenders on the way. Ten to nil Rowing Club.
The Ironsides turned it over again inside their own 22, and the VRC was able to get it to a hard charging Luc Gourdine, who proceeded to score the full-dive splashdown try of everyone’s dreams directly under the sticks. Godfather Stevie MacGillivray put the conversion in to make it seventeen to nil VRC.
Gourdine would later be sent off on a yellow in the 2ndhalf for attempting to tackle a Battersea player on his way from the end goal to the 22m to kick a drop out. He presumably felt shame.
The Ironsides knocked on the VRC door with multiple goal line phases at the end of the half, but were unable to put one in before the end of the first 30 min half, and had to go into the half with nothing.
The Rowers kept up their excellent defense initially, defending hard inside their own 22, but were unable to capitalize on chances, including an impressive 40 yard gallop by Samija. Perhaps suddenly realizing that they were in danger of getting shut out on their home pitch by a Canadian touring side that has been drunk for a week the Ironsides turned it on, scoring a converted try to make it 17-7, following that up with an unconverted try to make it 17-12 and leave the Rowers sideline wondering what the hell happened.
The Rowers re-grouped and pounded hard picks from the base of the ruck right up to a goal line that had been thoroughly washed away (and that I swear I was over with the ball to the ground, but whatever), before turning it over and allowing the hosts to move the ball the length of the field to tie the game with another try.
Watching a 17 point lead evaporate in the final 15 minutes of a game took a bit of the air out of a previously pumped VRC team, but it all came back as the Ironsides conversion attempt clanged off the spot where the cross bar met the uprights, and the final whistle went, sealing a 17-17 draw.
Battersea are excellent hosts. They fed us curry and rice with pints of bitters pumped out of old brass taps by a man that looked as though he had been doing it since the Heath administration.  A member told me that the club was founded by a tank commander after the second world war, to keep Battersea youth from getting into mischief with nothing else to do. The club are very proud to have the largest youth program in Britain. An autographed England National shirt hangs on the wall from Kyle Sinckler, who credits his success to the early stewardship of the Ironsides youth program.
Once the kit dries out, we’ll put it all on again for another game in Wales ahead of a Canada – Ireland clash at the World Cup. Stay tuned as the Rowers Euro Tour rolls on, undefeated.
Facebook
Twitter
Pinterest
LinkedIn

VRC speeds to success at the Oval