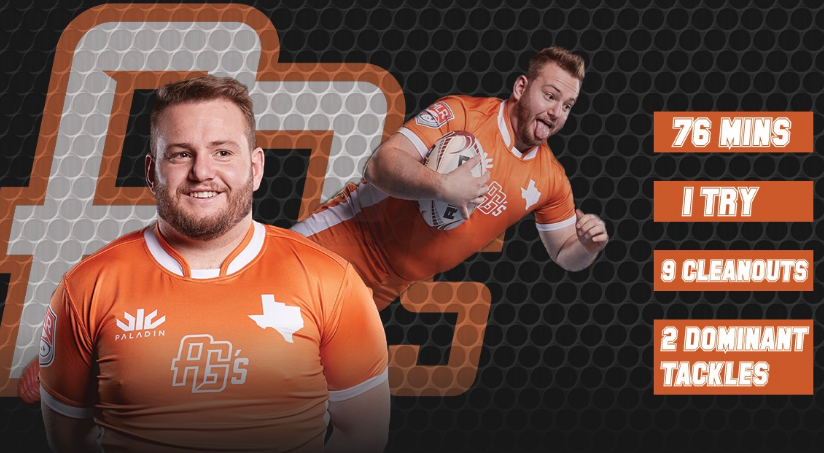 Welcome to the first edition of Rowers in the MLR.

VRC Rugby currently has two players plying their trade at Major League Rugby clubs; Mason Pedersen, holding down the starting XV tight-head prop spot for the Austin Gilgronis, and Doug Fraser, being featured in the back-line of Washington DC’s Old Glory RFC. Fraser is running behind a forward pack anchored by 2019 Rugby World Cup Champion Tendai “The Beast” Mtawarira. Doug played for the VRC for the start of the 2019/20 BC Premiership Season, where he was a dominant force in midfield for the Red and White.

Wearing the #14 Jersey for Old Glory for a week 2 game against the Seattle Seawolves, Doug Fraser was able to fight off a tackle and dot down in the corner for a try giving Old Glory a 13-6 lead. “Dougie Fresh and the OG” were able to upset the two time MLR Champion Seawolves by a score of 28-22. Great work Dougie! Keep it up!

The stars at night, are big and bright…

Down in the Lone Star State, VRC veteran tight head prop Mason Pedersen has used his second season in the BC Premiership with the Rowers to arrive in the MLR clearly game-fit. He has been an unbelievable addition to the club with his professionalism and work rate around the park. While wearing the red and white stripes, Mason has been able to solidify the scrums and make bone crushing tackles. Since his first day with the Rowers, it was evident why he played for USA rugby and is playing pro.

During the Gilgronis’ week 2 MLR fixture against RUNY, Mason showed that he had earned his spot in the first XV with a dominant performance that included one try and several huge tackles, one on former French international Mathieu Bastareaud playing #8 for RUNY, which was good enough to lead the club’s match report. Austin fell short against RUNY Saturday 49-31.

Great to see both these players have successful games in Week 2 and looking forward to MLR Week 3 on Saturday Feb 22, 2020, when Austin plays Utah and Old Glory takes on Houston.