All three divisions were in action against Burnaby Lake this past Saturday.
Firsts
The VRC First Division played  excellent rugby at Burnaby Lake this past weekend, coming from behind to beat the hosts 25-10. The Rowers took care of the ball in wet, sloppy conditions, successfully working it through phases until they could get it to their impact players. On a day when points were hard to come by in all divisions, the Firsts  put up a resepectable 25 points, 20 of which were scored by Austrailan phenomenon centre back Adriaan Meiring, who didn’t seem bothered by the conditions. Young Trevor Canton, out for a run at fullback, was also able to put one in. The forward pack, led by a classic performance from Captain Brendan Fagan, asserted themselves in the rucks and made themselves hard to drop, creating the type of space they need to work in the muck. Will Andreucetti stood out at blindside flank, making several key tackles and carries, as did substitute 2nd row Devon Moore, brought in  after a strong run with the thirds for an injured Sean Dignan (get well soon, Sean.)
Prems
Despite a physically strong and aggressive game, the Prems were unable to put any points on the board in Burnaby, losing 15-0 in the aforementioned sloppy conditions. The Rowers lost halfback Andrew Meakin to a questionable yellow card for what was deemed by the Referee to be an intentional knock on. The Prems didn’t lose the game for lack of effort. They trailed 8-0 until a very late try, knocking on the door several times but were unable to play the wide open, quick game that suits this team’s strength.
Thirds
The Rowers Thirds lost another heart breaker 7-6 in Burnaby. Despite failing to cross the line, the thirds played strong, hard rugby for all 80 minutes and looked like contenders. Fullback John O’Brien was 2 for 3 on penalty kicks in terrible weather. The Rowers defended well, shutting Burnaby down on their goal line twice, which was obviously one time less than necessary.
The Prems will get another crack at Burnaby Lake next Saturday November 14th in the first round of a knockout playoff to end the first half. The Firsts will also have a rematch against Burnaby Lake. The Third division will try to go 4-3 against the Squamish Axmen at Brockton.

CORRECTION: A previous version of this post indicated that the Firsts were on a bye week instead of playing on the Burnaby Lake undercard . The Rowers Ruck Muck regrets the error. 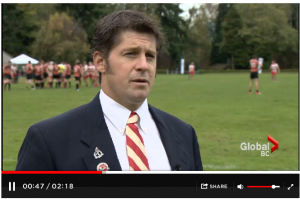