1sts
The firsts (7-1) started strong and forced SRFC (4-4) onto the back foot early into the first half. Two quick tries bolstered their first half attack, putting the Rowers up 12-0. Some strong, penetrating runs from the back-line continued to smother the Seattle “D” and the squad from the Emerald City had to fight from inside their own 22-metre line for most of the half. Some great Seattle defense kept the score down.

The Rowers seized firm control of the game about halfway through the first frame when Henry Recinos took an off-load from Gradyn Bowd 18 metres out. Bowd’s effortless pass unleashed Recinos who then zig-zagged past three tacklers before shooting across the try-line like an airborne spear.

The older FieldTurf pitch allowed for some speedy play and worked to the Rowers’ advantage for the rest of the game as the faster squad held Seattle back and denied them any momentum.

The Rowers shut down the Seattle offense for almost the entire game, allowing their opponents only one try. The VRC then added an exclamation mark to their win when James Paladino raced in for a try (see below) from about 35 metres. Final score: 36-7.

Special honours for the match go to Duncan James for scoring a hat-trick.

2nds
The Super-Twos (5-2) started their game the opposite way the first division team started their game. Slow and lethargic, the squad seemed unable to shake off their bus legs in the first half. Continuous Seattle (3-3) running constantly drove the Rowers back into their 22-metre line. Only some strong tackling on defense, which included two held up tries after strong Seattle running inside the five-metre line, allowed the Rowers to keep the game within some semblance of reach. The Rowers could have easily been down by five tries or more at the half. As it stood, the first half ended 15-0 for Seattle.

As the game wore on, Dave Hall managed to smash the Rowers’ goose egg when he punched past four would-be tacklers. Hall raced 40 metres to score a try under the posts, narrowing the gap to 15-7. Hall’s rewarding sprint seemed to wake up the Rowers and the game was on.

Seattle countered quickly though, touching the ball down in the Rowers in-goal area to stretch their lead to 20-7. But the Rowers started attacking Seattle on quick penalties from all over the field. The Super-Twos managed to punch in two more tries: one on the back of some stellar County Mayo-style rambling from Michael Jordan; and one on a pick from a set scrum inside the Seattle 22-metre line.

But narrowing the gap to 20-17 was as close as the Rowers got. Seattle counterattacked with six minutes to go in the match and pressured the Rowers inside the five-metre line. After a line-out win, Seattle mauled towards the Rowers’ line and a tired defense granted Seattle the final try of the contest. Final score: 25-17.

3rds
The Thirsty-Thirds trekked down to Seattle for an exhibition match with Redmond’s Eastside Axemen. The Axemen play in the Pacific Northwest Rugby Football Union and feature former Rower, Chilli Bean.

Although the thirds only brought a skeleton crew, the Axemen lent the Rowers a few bodies and both sides played an energetic game in the rain and mud of Marymoor Park. Final score: Axemen lots-Rowers a little.

The 3rds play a make-up game April 7 against Bayside in Whiterock, while the 1sts and 2nds have a bye. 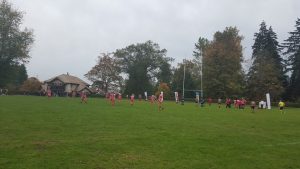 One thought on “Rowers split on the road in Seattle”