The Rowing Club’s Third Division played their final game of the regular season Saturday, beating the Surrey Beavers on the road 31-0.

The Rowers got off to a slow start, had some trouble keeping possession of a wet ball, and weren’t putting on the type of low hits that stop attacks. One early attempt at goal was stopped by the hosts, and another held up in the end goal, only for the Rowers to be turned over following the scrum at the five meter line, and have it kicked away. They were able to first get on the board in the 20th minute, center Jeremey Burtenshaw finding some space off of a rolling attack.

The disjointed offense began to find some rhythm and shape as the half wore on, and allowed Captain Steve “The Godfather” MacGillivray to find a hole and add another try before half.

Despite a 14-0 half time led, MacGillivray let his squad know in the huddle that they would have to fix mistakes and do better with the ball in hand. The Thirds kept better control of the ball to begin the 2nd half, and were able to take advantage of opponents’ handling errors with strong scrummaging, winning all of their own balls and several of the hosts’ balls for good measure.

Niall McDonough was able to architect a third try in the 65th minute, running a strong support line off second row forward Graham Perrin, capping off a 20 yard carry that Perrin began with a clean interception off of a strong defensive pressure line.

Characteristically strong play by utility back-liner Kevin Foyle accounted for a great many Rowers yards on the day and kept the Rowers attack in position. Foyle also led the squad in tackles with seven.

Burtenshaw was able to add a second try on the day, and eighth man Taureen Jefferies found the dirt in the corner of the end goal with the ball as time expired. Young fly half Ashley “The Mop” van Rensburg was 3 of 5 on conversions in another strong performance.

Second year Rower Mitch McNicol, who was kind enough to give this blogger a ride home, had an impressive outing off the bench, showing a game that has grown in leaps and bounds over two seasons. McNicol had several strong carries and was tied for second in tackles with van Rensburg and MacGillivray, who had five each.

The win puts the Rowers thirds at an 8-7 record on the year, sixth in the standings and in possession of the final playoff spot. They Rowers figure to match up against the Squamish Axemen in the first round. The Rowers most recently played the Axemen on the road last Saturday, a skeleton Thirds squad falling 20-0 to Squamish on the road. The Rowers handed the Axemen their lone loss this season in a dramatic last-second victory at Brockton back in October. 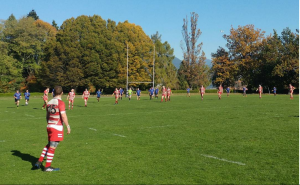 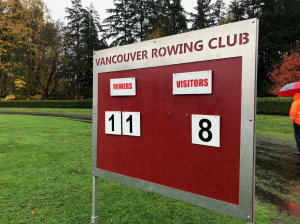 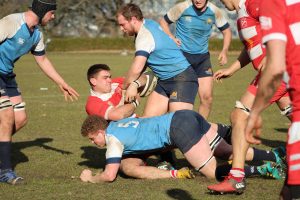 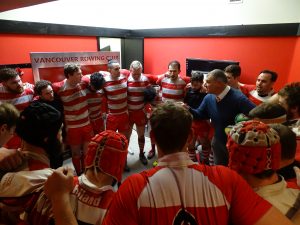