The Vancouver Rowing Club travelled to Victoria Nov. 23 for matches in the premier and 1st divisions against the James Bay Athletic Association. The two clubs have been battling for more than 100 years and, in that time, two challenge cups have been added to the competition – the Ferguson Cup and the Cox Cup.

The Rowers’ understudies played an up and down game against James Bay but finished the first half with authority. The late burst enabled them to play their way into a strong second half, ultimately earning a 34-10 victory in their Ceili’s Cup League game on the road at MacDonald Park.

The Rowing Club started off slowly, giving up an early try. Down seven to nil, the Rowers built on a successful penalty kick by scrum half Andrew Meakin with some strong runs by fullback Roman Plantey. Plantey added the club’s first try on the day and after the missed covert the Rowers were up 8-7. The 1sts conceded the lead a second time on a penalty kick before the half, but were able to finish the first forty on the front foot after some strong offensive runs.

The Rowers opened the second half with strong pace, good defense, and improved set pieces. Big Irish lock Sean Dignan scored a try. Plantey added a second try. Centre-back Nikola Samija scored on an exciting run from beyond the 22-metre line after cutting into space and breaking tackles in spectacular fashion. Substitute back-row forward Jon Mergui, and birthday boy, kicked the conversion on Samija’s try to finish the game.

The 1sts earned a bonus point for scoring four tries or more (five in total), along with the right to put their name on the Ferguson Cup, one of the oldest sporting challenge cups in Canada.

The VRC premier side lost to James Bay 29-8, conceding the Cox Cup, and key ground in the CDI Premiership League.

Despite staking the hosts to a 10-5 lead at the half, the Rowing Club’s top side played strong rugby and gave the crowd their money’s worth in a tough contest against the James Bay hosts.

The Rowers scrum was strong, though a few lineouts lacked their characteristic fluidity. Both teams defended exceptionally well, and played hard, entertaining rugby.

The Rowers failed to convert on several key opportunities, including a favourable 2-on-1 play down the wing, that will no-doubt haunt the premier side for some time to come. James Bay was able to pull ahead with two converted tries in the final 10 minutes to produce a score indicating a much greater difference between the teams than was apparent in the first 70 minutes.

The Rowers dressing room was disappointed after full-time. Coach Jeremy Sabell lamented “golden opportunities” that went begging. Though Sabell stressed his confidence in the ability of his charges remained unshaken.

More photos can be found here. 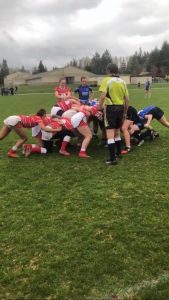 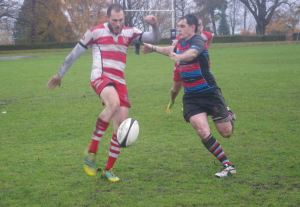