The weather was miserable, the pitch was soggy, and the nothing went the Rowers’ way Nov. 3 as Abbotsford soundly defeated all three VRC squads at CFV Exhibition Park. “We didn’t get the results we wanted, despite the efforts, and sometimes that’s they way it goes,” head coach Jeremy Sabell said after the matches.

As the heavy rain began to pound the pitch, the Thirsty Thirds limped out of the gate. Their sluggish start was evident from the kick off as Abbotsford posted a try one minute into the match. Abbotsford added two more tries in the first 5 minutes and the Thirsties were down 21-0. After the third-try wake-up-call, the Rowers started to finish tackles and started to hit the rucks with force, making a game out of the match. Abby added a late try in the half to make it 26-0.

The Rowers continued to fight in the second, despite the lopsided scoreline. Abbotsford added two more tries in the half but they didn’t break the Rowers line for long runs like they did in the infancy of the first frame. Final score: 38-0. Next game: Shield playoff round, Nov. 17. (The probable match up is @ Klahanie vs. Cap “B.”)

The Rowers 2nd division played well against Abbotsford in what had to be one of the muddiest games on record. Despite the conditions, the referee made it clear early that he would consider the ball free of the ruck the instant a player put two hands on it. This made for a much slower game than it already was.

But the Rowers rucked well in the muck, though they were unable to establish any momentum in a game characterized by frequent knock-ons, and a lack of fluidity.

Later in the game, the Rowers pressed for a try with a sustained goal-line attack, but it was cut short on a questionable knock-on call. The errant slip deflated a critical scoring chance. Following the knock-on, Abbotsford scored a try after a series of kick-and-chase punts that spanned 90 metres, and the Super Twos never recovered from there.

Abbotsford won the game 31-20 and came away with a bonus point. The Rowers are no doubt looking forward to the rematch March 23 at Brockton Oval. The squad (5-1) falls to third place with the loss. Next game: Nov. 24 at Surrey.

The day didn’t get any better for the Rowing Club when the first division squad took the field. Although the Rowers started with some momentum, playing in the Abbotsford end in the beginning of the game, they couldn’t convert their early possession into very many points.

The Rowers hit an early three but failed to build on it. Abbotsford played well and retained most of their ball in rucks and mauls. Final score: 29-3. The squad (4-2) falls to fourth place with the loss. Next game: Nov. 24 at Surrey. 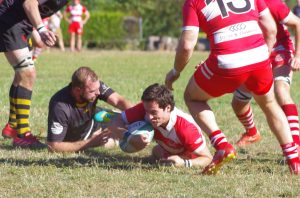