Seconds stay atop the log with the lone victory of the day
(Photos: Malin Jordan)

The Vancouver Rowing Club garnered one victory March 24 but suffered two defeats to the Bayside Sharks at Brockton Oval.

2nds
The Super-Twos (5-1) remain in first overall after streaking to a 30-13 win over the Bayside twos. With the win, the Super-Twos will likely head into the playoffs as the number one seed.

They are 10 points up on Bayside, but the Sharks have a game in hand.

1sts
The Might-Firsts (6-1) lost their first match of the spring campaign as Bayside (6-1) snapped the Rowers’ undefeated run with a 50-26 win.

The Rowers started strong but seemed to miss key tackles on pivotal Bayside attacking runs. Those scrambles resulted in tries and the Rowers found themselves down early in the match.

Things worsened for the squad in the first half when hooker Lucas Clark (pictured) was given a yellow card for tackling a Bayside player in the air.

The Mighty-Firsts managed to claw some points back in the second half with some nice tries, including a zigzagging sprint to line by Karl Mudzamba, which provided for a much more flattering scoreline.

Though both teams have identical records, the firsts are now alone in second place with 29 points to Bayside’s 32. (The Sharks have won 3 more bonus points than the Rowers.)

3rds
It was a long, hot day for the Thirsty-Thirds as they battled an undefeated Bayside squad in the first match of the day.

The Rowers started strong and scored the first try when Jakey Curtis juked his way across the try-line from a few metres out. But that was as close to winning as the 3rds could manage as Bayside ran in try after try, winning the match 37-7.

The thirds battle Bayside again in two weeks in Whiterock. The first and seconds travel to Seattle this weekend for matches at Magnusson Park. 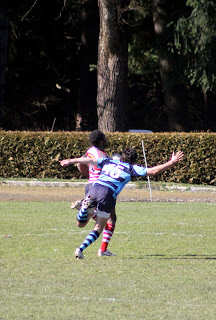 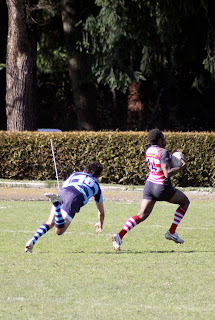