The VRC Nation came together to honour an outstanding individual at the annual Captain’s Dinner March 3.

More than 140 Rowers, both alumni and current players, ventured down to the VRC clubhouse on Coal Harbour for the annual event. The night included a “state of the union” address from chairman Richard Bice, a keynote speech from former Canada player Mike James, and the (in)famous rookie gravy chugging race.

But most importantly, they came to honour Tim “Tootall” Shaddick, a long-time Rower who first started playing for the club in September of 1970. Shaddick received the first ever VRC Rugby Lifetime Achievement Award.

Known for his generosity and big heart, Shaddick has done a lot over the years to pass on the Rowers’ tradition, temperament, and team culture to every player donning the Rower hoops.

The club also gave Tootall a book comprised of photos from his lengthy days as a rugger, as well as his days as a coach and supporter. There was also a video with interviews, which can be seen here. 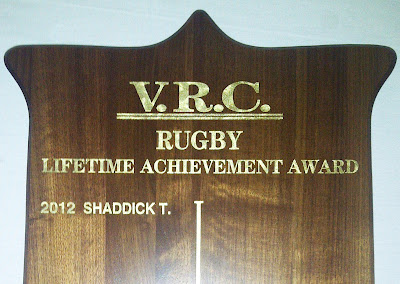 Tour Journal: The Rowers Tour To Remember Takes on The Foxes in Bedlinog